Ant Bounces Back – Against All Odds!

Ant is an adorable 9-year-old domestic short-haired cat. In January, he was brought to us from Norwich, by his owners, as an emergency referral.

When Ant arrived, he was very poorly indeed. He was seen straight away by our Internal Medicine Team who, following clinical examinations and diagnostic tests, discovered that there was a stone causing a blockage in his bile duct. At this point, he was transferred to our Surgery Team and Daniela Murgia carried out an emergency operation to remove the stone.

The surgery went very well but there were serious consequences resulting from the blockage. Ant had developed a severe infection involving bugs which were resistant to most antibiotics. The infection was affecting his liver, pancreas and biliary system. Ant’s liver in particular was badly affected.

The next few days were touch and go for Ant, and his prognosis was not looking hopeful. His owners were so concerned that they brought their young son into the clinic to say goodbye to his beloved pet. 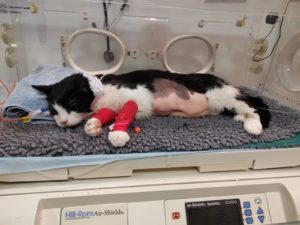 Ant was being cared for by a dedicated team of nurses working in our Intensive Care Unit And Feline Ward. For 4 days he, the Critical Care Specialists, the Surgeons and the Nurses, were fighting for his life. However, against all the odds, he turned a corner on Day 5 and his condition slowly started to improve. He was able to return to a normal ward and, 4 days later, he was ready to go home and be cared for by his family.

Now, 2 months later, we are pleased to learn that he is doing really well and almost back to his normal self. Ant’s owners are very grateful for the dedication and care that was given to him by all the staff of DWR. Click here to see how well Ant is looking.