A butterfly in the spine, the hemivertebrae problem

Congenital malformations of the vertebrae causing spinal deformity have been reported in dogs and occur during the pre-birth phase. The causes are not fully elucidated, but there is quite a broad opinion that multiple factors such as genetic defects, abnormal vascular blood supply of the vertebrae and insult during the pregnancy are implicated singularly or in combination.

In people, genetic mutations causing vertebrae malformations have been identified. At present there is no DNA test for vertebra malformation in dogs. The congenital malformations are also believed, most likely, to be caused by a complex hereditary disorder rather than a simple single DNA abnormality.

Canine hemivertebra (HV) – called also ‘butterfly’ vertebra due to the characteristic shape of the vertebral body on radiographic study – is one of the most common congenital vertebral malformations that results from the vertebra not develop properly.

HV is seen commonly in small brachycephalic (short faced) breeds (screw-tail breeds). Thus, Pug, French Bulldog, English Bulldog and Boston Terrier are the most commonly affected breed; but the condition has been reported also in other small breeds such as Maltese, Chihuahua, Yorkshire Terrier West Highland White Terrier, Pekingese and Dachshund; as well as in large breeds such as German Shorthaired Pointer and Doberman.

The occurrence of HV in the so-called screw-tailed breed dogs is thought to be hereditary and in German Shorthaired Pointer an autosomal recessive inheritance is suspected. There is a general feeling that HV is a quite widespread problem in Pug dogs.

There is no sex predilection and approximately 60% of dogs show the first neurological deficits before they reach one year of age.

Hemivertebrae is manifested as a wedge-shaped vertebrae deformity that can lead to secondary progressive spinal deformity – kyphosis – and spinal cord compression. The spinal cord compression can become so severe that it causes marked progressive neurological deficits affecting the pelvic legs and making the dog becoming progressively weaker on his back legs. This can progress to make the dog paralysed and incontinent.

Historically the diagnosis of HV was based on the characteristic butterfly-shaped radiological appearance of the vertebral body. However, although the radiographic appearance can be useful to screen dogs pre-breeding, the radiographic evidence of HV doesn’t mean that the dog will develop associated neurological deficits. HV can, in fact, be an incidental radiological finding in the absence of neurological deficits. Thus, it is important to remember that radiography can give information on the presence of spinal abnormalities, but it cannot predict whether they will affect the function of the spinal cord and consequently the back legs and the bladder/bowel function. The best and most definitive test to provide information on possible congenital and degenerative spinal cord disease is magnetic resonance imaging (MRI).

If a dog shows neurological signs associated with spinal cord compression secondary to HV, neurosurgery is the only realistic and potentially resolutive treatment.

This option is available in only a few specialist neurosurgery centres in the UK. At DWR, the neurology/neurosurgery service has significant long standing experience in the neurosurgical treatment of HV and we are very proud to have a success rate of approximately 90%, contributing greatly to the welfare of our patients.

Many owners and breeders question whether a dog with radiographic signs of HV should be excluded from breeding programmes when it has so many other breed qualities which could be lost. That is a very important issue and only ongoing neurological and genetic research will be able to give an answer, hopefully in the next few years. Thus, at the present time, the advice is not to use dogs with any congenital anomaly for reproduction. It is recognised that this risks the loss of other good breed qualities and narrows the gene pool even further. However, until further scientific information becomes available, it is advisable for good breeders to use common sense in the case of any presence of hemivertebra. The HV problem can be in fact be limited by intelligent breeding practices. 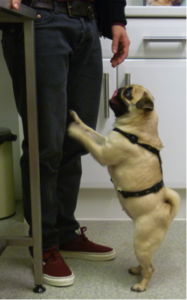 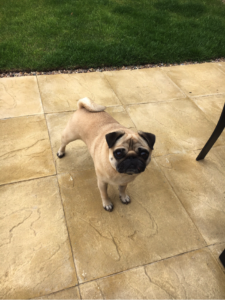 This dog had limited mobility before surgery and she made a fantastic recovery. Five years after surgery she is still enjoying life.