Doin’ the Best for Doolin

Doolin was found abandoned in a field in Romania in the middle of winter and, luckily for her, rescued by not-for-profit organisation Hope for Romanian Strays. She was cared for and spayed before being brought to the UK where Foster Carer, Suzy Ash, had agreed to give her a temporary home.

Very soon after she arrived, Suzy noticed that she was urinating frequently, but passing very small quantities. Suzy is a qualified nurse and realised straight away that this wasn’t normal, and so she took Doolin to her local practice, Vets4Pets in Ipswich.

There she was examined and given medication but, as the situation didn’t imrove, Suzy returned with Doolin and an ultrasound examination was performed. This identified a mass close to her uterus and the vet performed an exploratory laparotomy.

At this point Suzy received a call to tell her the outcome and advise her that the mass was, in fact, a haematoma. This is a swelling consisting of clotted blood and probably occurred as a result of her spaying. The vet said that she would need to be referred to a Specialist facility if the mass was to be removed. The other option would be to put Doolin to sleep while she was still under the anaesthetic.

By this time, Suzy had already (inevitably) become very attached to Doolin and so she contacted the charity and persuaded them to use their emergency fund to pay for Doolin’s treatment. The total bill from the first opinion and referral vets was estimated at around £4,000.

Suzy brought Doolin to DWR and the necessary surgery was performed by Specialist Small Animal Surgeon, Rachel Hattersley. Thankfully, all went well and 2 days later Doolin was back with Suzy who is caring for her through her recuperation. 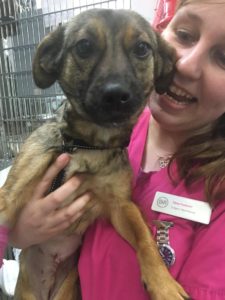 Word soon got out among the nursing staff at DWR that Doolin needed a forever home – and there was no shortage of offers!! However, having gone through all the trauma of the diagnosis and treatment, Suzy decided to convert from a foster carer to an owner – and Doolin’s future seems to be safe and secure. She certainly doesn’t look too concerned in this picture. 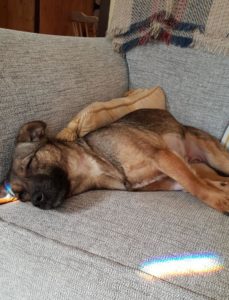