Keeping An Eye On Maisie!

In September 2016, Lancashire Heeler ‘Maisie’ was referred to us by her first opinion vet because her left eye had become cloudy overnight. She was seen by Ophthalmologist Elena Fenollosa Romero who rapidly diagnosed Primary Lens Luxation.

Elena advised that surgery would be necessary to remove the displaced lens and she operated on Maisie later the same day. The operation went well and Maisie returned home to recover shortly afterwards. She was then seen for a number of check-ups and, unfortunately, during one of these visits, it was noted that the lens in her right eye had also become unstable and a further surgery was performed to remove this lens also. 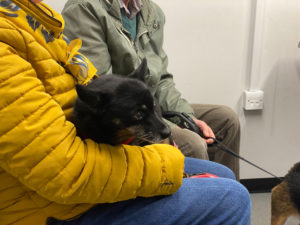 Over the subsequent 3 years, Maisie became a regular and much-loved visitor to our clinic. This was due to a build-up of high pressure in her left eye and the development of ulcers and abscesses.

Maisie’s owners took every possible precaution to protect her eyes, initially using a visor but progressing to a pair of well-fitting goggles which Maisie tolerates extremely well.

Sadly, in February of this year, the condition in Maisie’s left eye had reached a stage where it was necessary to remove the eye and this operation was again performed by Elena. Maisie, who is 11 years old, adapted well to her reduced level of sight but she had a valuable ally. Her younger house mate ‘Hope’, just 4 years old, has naturally developed the role of ‘guide’ for her. When they are out walking together, Maisie follows Hope who, instead of running ahead as she would previously have done, now stops and waits for her playmate. 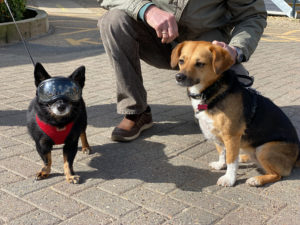 Meanwhile, the pressure in her right eye is being kept under control but, unfortunately, it has a very small but persistent ulcer. Maisie’s referring vet is treating this with a drug which has recently become available and we are all hoping that this will have a positive effect.

Realistically, however, there is a high chance that Maisie will, at some point, also lose her right eye but her owners have prepared well for this eventuality. They have established a walking route which they follow each day. They are also careful not to re-arrange any of the furniture in the house or items in the garden.

For the moment, Maisie continues to have limited sight but, even though it is likely she will become totally blind in the future, her loving owners and canine friend are doing all they can to make her life as enjoyable as possible.