Help us to keep antibiotics working…

‘Kennel Cough’ is the common name for Infectious Tracheobronchitis, a highly contagious respiratory infection which can affect dogs throughout the year but is particularly common during wet winter months. Typical signs of Kennel Cough include a harsh, hacking cough, sometimes leading to retching, and a watery, nasal discharge (much like human coughs and colds). In uncomplicated cases, these signs will usually last 1 to 2 weeks, during which time affected dogs usually continue to be active, eating and drinking normally. Therefore its medical impact is usually of ‘nuisance’ level. Rarely and in severe cases fever, lethargy and a decreased appetite may be seen. This is most likely to occur in unvaccinated, young, elderly or debilitated dogs. There are a variety of causes of Kennel Cough often acting in combination and involving both bacteria and viruses of which the bacteria Bordetella bronchiseptica and Parainfluenzavirus are most virulent. 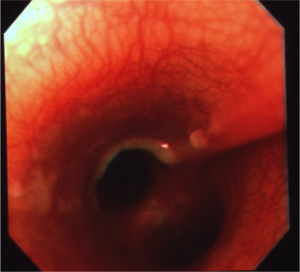 Endoscope of an animal with Bordetella infection

The coughing results from inflammation of the airways and accumulation of mucus. The most effective way to avoid kennel cough is to follow a recommended vaccination regime (routine vaccinations will include Parainfluenzavirus, but a separate ‘Kennel Cough’ vaccine is recommended for Bordetella bronchiseptica); and to ensure that any premises in which your dog may encounter large numbers of dogs (eg boarding kennels or training establishments) have a strict vaccination policy. The greatest problem relating to Kennel Cough is its extremely contagious nature and its incubation period of 7-10 days during which dogs may show no clinical signs but still be contagious to other dogs. When an infected dog sheds bacteria and/or viruses in respiratory secretions, they are present in the air and inhaled readily by other dogs in the vicinity. They can also be spread via such objects as toys or drinking and feed bowls. For this reason kennels, or any environment with large numbers of dogs in a confined space, are particularly prone to transmission of the disease. Treatment of Kennel Cough depends upon the severity of the clinical signs. However, most dogs will recover completely without any treatment within 2 weeks. During this time, and for a period of 2 weeks beyond cessation of any coughing, affected dogs should not be in contact with other animals, but should be ‘garden walked’ or exercised away from other dogs. If a dog’s condition does not improve, or deteriorates, within a week of initial signs, veterinary advice should be sought as this suggests that there may be an underlying condition. Affected dogs should not be taken into veterinary waiting rooms as they pose a risk of infection to other dogs who may themselves have more serious disease problems. If a veterinary visit is required, the practice should be made aware of the situation and they will advise on procedure.