Olive bites off more than she can chew!

When Richard Brewis decided to call in at the Chinese restaurant, he had no idea what the repercussions would be. Later that evening, his cat Olive decided that a tasty kebab stick was too good to resist but, unfortunately, bit off more than she could chew. Olive didn’t have a great start in life. In 2016, at just a year old and pregnant, she was rescued by Wood Green Animal Shelter and had kittens shortly afterwards. The kittens were all re-homed fairly rapidly which left Olive needing a new owner. Luckily for her, Richard Brewis adopted her almost two years ago and she has become very much ‘one of the family’. Richard had just finished eating his Chinese meal last week when he put his plate aside to answer the telephone. This was far too good an opportunity for Olive who decided that the kebab stick would make a tasty plaything. Richard saw her take it but as she jumped down onto the floor the stick appeared to jab her and was left protruding from her mouth. He immediately tried to retrieve it but she was too quick, beating a hasty retreat via the cat flap. Realising the danger of having the stick lodged in her mouth, Richard followed her outside and called her, but to no avail. Despite the fact that it was raining hard, he donned a coat and walked the streets calling her and looking under parked cars to see if she had taken refuge. However, he was unable to find her and so returned home and put out her favourite treats in the hope that these would lure her back during the night. When she still hadn’t re-appeared by 5.30 the next morning, and the treats were untouched, he became very concerned and braved the rain once again, scouring the neighbourhood and calling her. He then remembered that Olive was a great favourite with his next door neighbours and so he called them to ask if they’d seen her. They joined the search and sent their granddaughter out to look in the garden. Hearing a noise from under the rhubarb patch, she took a closer look and there was Olive, looking bedraggled and clearly unhappy. Richard was delighted to see her took her straight home. Worried that the stick may have cut the inside of her mouth, he opened her jaws and was horrified to see that, although she must have bitten off the end, there was still a section of the stick which had pierced the inside of her mouth. He took her straight to his local vets who referred Olive to Dick White Referrals, veterinary Specialists close to Cambridge. Soft Tissue Surgeon, Rachel Hattersley, examined her and, although she was bright and alert, she found that there were about 3 cm of the kebab stick still penetrating the inside of the mouth. 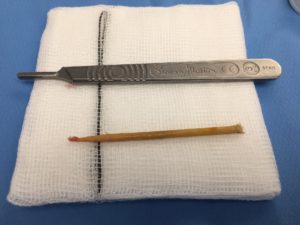 A CT scan showed that the end of the stick penetrated the ear canal. Olive was taken to theatre and the stick was removed surgically in an operation lasting half an hour. Olive is now at home and improving each day. Her owner is extremely happy to have her back. “She is a very special cat” he said “and I am so grateful to all the staff at Dick White Referrals for the care they have given her. From the time we arrived, I had absolute confidence that she was in the best possible place, not only because of their expertise but also their care and compassion”.