Olly-Bob, a one-year-old domestic short-haired cat, is the much-loved pet of Dawn Dominic who had rescued him from the Blue Cross. She was horrified when he ran into the house recently, with blood pouring from his mouth, and she took him immediately to his local vet. It was not obvious what had caused the injury – possibly Olly-Bob had been hit by a car or, given that he lives close to stables, sustained a kick from a horse.

He was nursed over the weekend by his owner but his condition did not improve. He was wheezing frequently and was unable or unwilling to eat. When he was taken back to the vets, they referred him on to Dick White Referrals, a Specialist Referral Centre near Cambridge, for further investigations. 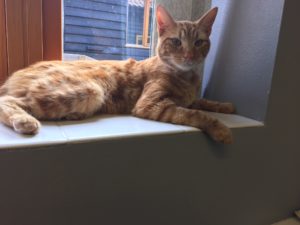 Following a thorough clinical examination and blood tests, Olly-Bob was given a CT scan and his owners were shocked to learn that the images showed many fragments of metallic shot distributed through the soft tissues of his face and neck. These had caused multiple small fractures and fragments of bone were evident within the tissues. He was then transferred to the Soft Tissue Surgery team who partially removed the shot although some was left in place as it was felt that more damage would be caused by removing it. A flap was sutured in place to close an oronasal defect. 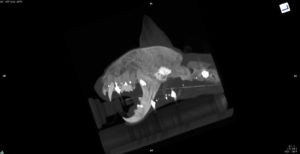 Olly-Bob was unable to eat normally following his surgery and therefore a feeding tube was placed. When he was allowed to go home, his owner continued to use this tube to administer all food for a further two weeks – although at one point he somehow managed to remove the tube and it had to be replaced! After a further week of feeding him mashed food he returned to DWR on 25th July for a re-check. Thankfully, he was recovering very well from the ordeal and subsequent treatment but, understandably, is still very nervous. It is horrendous to think that Olly-Bob may have been shot deliberately but, unfortunately, such incidents do occur and it is always worth bearing this in mind when pets are injured without an obvious cause.