Personalised Vaccine for Yogi the Lab

Nobody wants to receive the news that their dog has cancer, but it is encouraging that the array of available treatments is increasing. At Dick White Referrals, we have just administered a new form of personalised immunotherapy to a dog for the first time.

Immmunotherapy is the treatment of disease either by activating or suppressing the immune system. Ever since the first vaccine was approved for the treatment of human cancer, in 2010, this technique has been of great interest to researchers, doctors and the pharmaceutical industry.

In recent years, however, the veterinary profession has also taken a keen interest in this ability to manipulate the immune system and a French company, Urodelia, has now developed APAVAC, a vaccine which can provide tailored cancer treatment for individual animals. On 26thJuly, the vaccine was used at DWR to treat lymphoma in a dog.

Yogi is a 6-year-old Chocolate Labrador who was diagnosed by his first opinion vet with lymphoma earlier this year and referred to us for a consultation with Head of Oncology Davide Berlato. Our in-house laboratory performed a sophisticated analysis (immunohistochemistry and flow cytometry) on a biopsy to subtype the lymphoma and a diagnosis was made of ‘follicular B-cell lymphoma’.

Knowing that the newly available vaccine has been shown to be effective against this type of lymphoma, Davide explained to Yogi’s owners, Hannah and Andrew Chapman, that this could enhance the traditional treatment that would be offered and they were very keen for their beloved pet to have every possible chance of long-term survival.

Davide contacted the Urodelia who supplied our laboratory with the basic kit for preparing the vaccine. To tailor the vaccine treatment specifically to Yogi’s tumour, a sample from his biopsy was used to prepare the vaccine, which will be administered on 8 occasions over a period of 5 months. 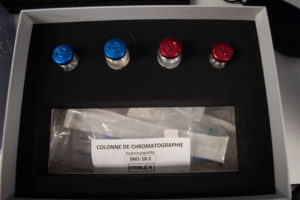 His owners are excited at the prospect of success with this new therapy and said “we feel very lucky to have been referred to Dick White Referrals. The Oncology Team has been great, keeping us informed and giving us every confidence that Yogi is in the best hands”.