Harriet started her working life as a waitress but always had a passion for animals, so knew she wanted to work in that area. In 2005 she applied for an Animal Nursing Assistant role at the Animal Health Trust (AHT). Not surprisingly due to her lack of experience she didn’t get that role but was offered a role as a theatre technician. Although theatre and surgery weren’t necessarily the career path she wanted to go down she rose to the challenge knowing her goal was to become an Animal Nursing Assistant. 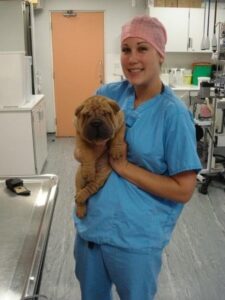 Working in the theatres Harriet gained valuable experience in surgical procedures, instrumentation, and preparation of anaesthetised patients for surgery. On quieter days she would help in the small animal wards to gain experience with the ‘awake’ patients and soon realised she wanted to become a Student Veterinary Nurse (SVN). 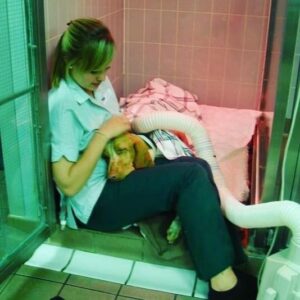 Almost three years later, Harriet was delighted to be offered an SVN position, and over the next two years during her training she rotated around the wards, clinics and theatre. Instruments and prepping patients were her speciality and she worked at this every other weekend and learnt so much. She found the team were an incredible support and she still works with some of the same colleagues 15 years later here at DWR! Harriet was over the moon when in 2010 she passed her nursing exams to become a qualified Registered Veterinary Nurse (RVN). Although she was fully qualified there weren’t any vacancies to be an RVN, so she worked as an Animal Nursing Assistant for eight weeks until she was offered a shift nurse role involved working on an 8-week shift pattern including working 13-hour weekend day and night shifts with a rotation through clinics and wards. 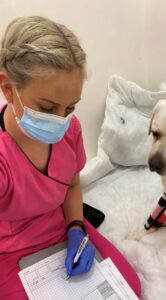 Harriet stayed in wards for three years, then moved to a Theatre Nurse position rotating weekly between Neurology, Soft Tissue and Ophthalmology theatres. Harriet felt she needed her next career move so after nine years at the AHT in 2014 she took a role at DWR rotating as a Medicine and Surgery Ward Nurse. In this role she gained a huge amount of experience in high dependency nursing and became confident with wound care, chest drains, urinary catheter placements, feeding tube placements and monitoring patients recovering from major surgery such as Thoracotomy’s. 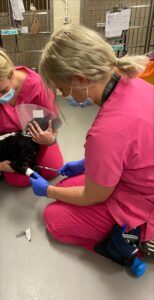 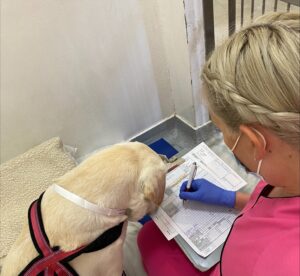 Just two years later Harriet was offered a Ward Supervisor role that she really enjoyed, as alongside her nursing role she supported the Nursing Manager with tasks such as organising the rota and this sparked her interest in a managerial role. After just nine months she was promoted to Medicine Ward Nursing Manager and has been in the role for six years now. 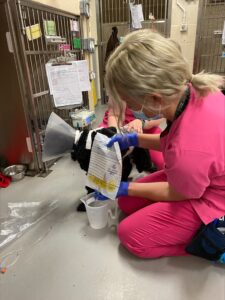 Harriet loves the role as her duties include overseeing the smooth professional running of the Internal Medicine and Cat wards ensuring all treatments and procedures are carried out to the highest standards. She also manages, creates rotas and organises shifts for her team of 11 nurses and attends regular senior nurse meetings. She specifically enjoys supporting the other nurses and is constantly working on ways to improve inpatient care. Harriet also helps with the organisation of the mental health first aiders group and many exciting projects across the referral centre.

Looking back at her career Harriet says that she absolutely loves her profession, as veterinary nursing provides so many potential opportunities and different career pathways, as well of course as no two days ever being the same in the care of the lovely pets she meets.